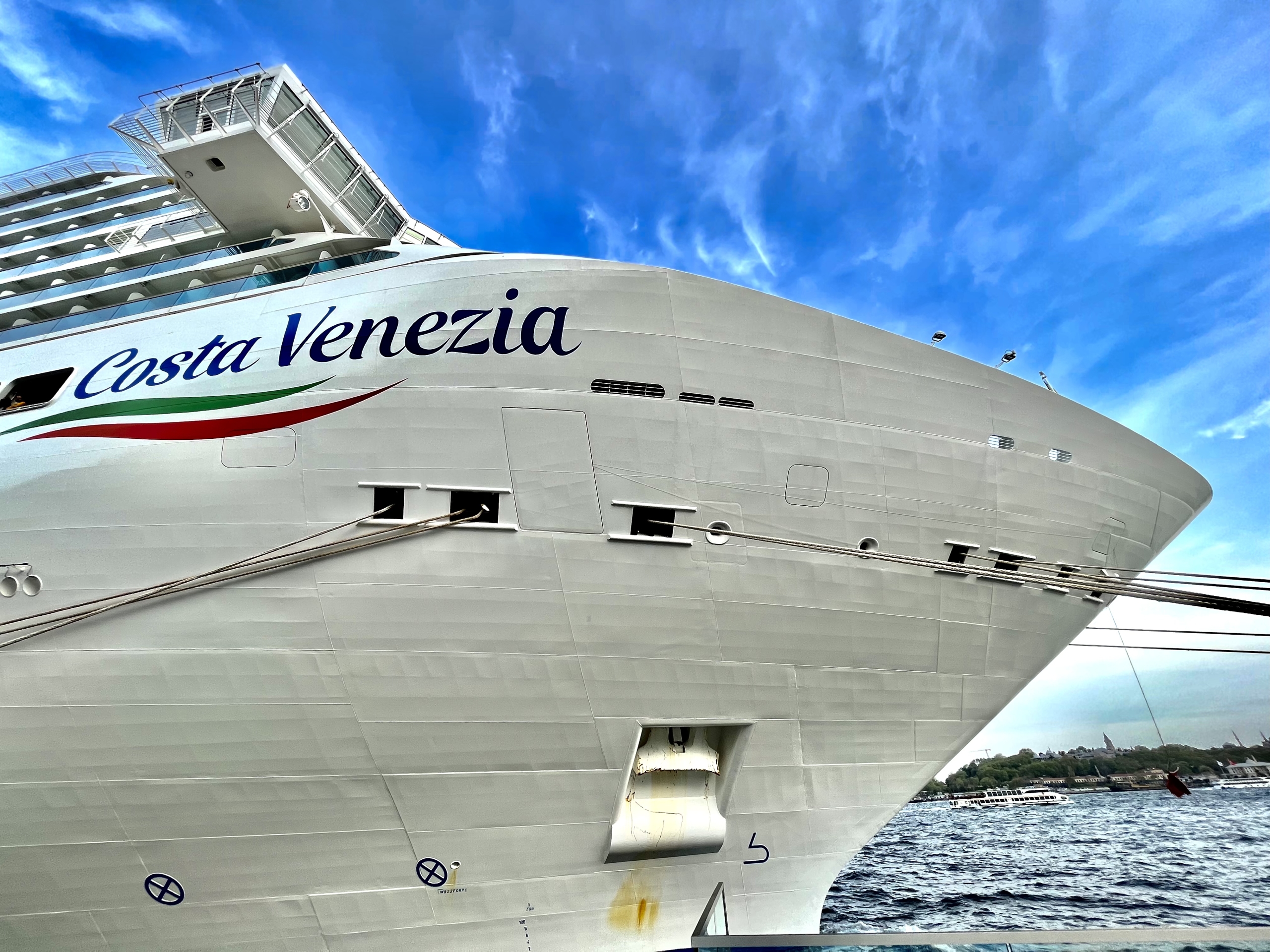 What do Istanbul and Venice have in common? They are both on the Bosphorus. Isn’t that right? But they certainly do: at least two days a week. That’s when MS Costa Venezia, Venice’s ambassador, is moored at Istanbul’s modern Galata cruise port. This harbour is just as much of a challenge as the floating Venetian beauty with its expressive interior.

Istanbul’s port facilities are centrally located: you can walk to Taksim Square, to the Galata Bridge on the Golden Horn and it is not too far to Hagia Sophia. The distances in the terminal, on the other hand, are long: almost everything is underground and it quickly takes 15-20 minutes to walk from or to the ship. In addition, there are numerous controls (terminal entrance, boarding pass, security, customs, gangway) that you have to go through every time in every direction without exception. You also have to go through a Travelvalue shop after all the checks – another three minutes extra. If you are not comfortable on foot here in the terminal, you should order a wheelchair – otherwise you won’t have any walking pleasure.

The promenade along the quay is very appealing with its quality shops and restaurants – it’s a great place to spend time, with the enormous Venezia always in view. Equally visible is the historic Tophane Clock Tower, built in 1848, a witness to a bygone era and the oldest existing clock tower in Istanbul.

Costa Cruises will use Galata-Port as a year-round base port for the Venezia from the 2022 season onwards – actually, it was supposed to be deployed in Asia, but the Corona pandemic has prevented this so far. And so it happens that I board the ship rich in impressions of the city on the Bosporus and immerse myself in the contrasting world of Venice for a week. But not only that: while Venice accompanies me virtually at every turn in the ship, I visit the extremely attractive destinations of Crete, Rhodes and Kusadasi in the Aegean. Costa’s advertising slogan „discover the world“ can be experienced all too well for oneself on this voyage between Asia and Europe. After plenty of time to explore both the Asian and European parts of Istanbul, we set sail for Crete. On the first day at sea, I get to know the ship thoroughly: together with Guest Relation Manager Pompeo, we go on a tour of the spacious ship. Let´s go!

It is no coincidence that MS Costa Venezia is named after Venice: virtually everything on board is reminiscent of Venice and is associated with the world-famous lagoon city. This is presented in an expressive way in the Marco Polo or Canal Grande restaurant. The latter, like the Gondola Lounge, features original Venetian gondolas.

In the cabins and public areas, pictures and art prints are linked to the lagoon city or the carnival there. The three-deck-high Piazza San Marco is impressive – as is the daily live music from its balcony. Right next to the piazza is the ship’s reception, which is so unremarkable that it is almost hidden from view.

MS Costa Venezia was built for the Chinese market, but the covid pandemic is still preventing the ship’s planned deployment in Asia. For the time being, she will therefore cruise in Mediterranean waters. The characters on board, which are incomprehensible to Europeans, are unmissable – they can be found almost everywhere and bear witness to the short history of the new ship.

Language barrier? Not a chance!

With Costa, you don’t have to know Italian or Chinese. English is spoken by every crew member and often someone with knowledge of German can be found if desired. It is helpful that the menu cards are available in seven languages. To do this, you scan the respective QR code with your smartphone in the restaurant or at the bar and are then well informed about the offers. The technology works reliably and is easy to use.

Various culinary delights on board

In addition to Italian and international cuisine, there are also Asian-influenced alternatives on board: the Sushino Sushi Bar, the Dim Sum Bar, the Hot Pot Restaurant or the Japanese Teppanyaki-Accrobatic Show Cuisine. There are 13 restaurant options in total and there is certainly something for everyone. Some of these options require a surcharge and the difference is great. From a small fee to a substantial amount, it’s all up to you. The included restaurants already deliver such good quality that you really only need the additional payment options if you want to treat yourself to something extraordinary.

For the first port of call – Heraklion on Crete – there is a wide range of excursions offered by Costa MyTours. Since individual shore excursions have recently (finally!) been allowed again, I decide to walk around the city on my own. After several trips in the „bubble“, the temptation to do something individually is too great. The well-kept city centre is appealing and spreads the typical Greek charm that I personally appreciate so much.

For the evening departure, the Aperol Spritz bar on deck 15 offers an appropriate sundowner. The subsequent dinner in the Canal Grande main restaurant is very tasty: the dessert creations of Costa patisserie chef Riccardo Bellaera are particularly impressive: little works of art that flatter the senses are delivered every evening by the genius of sweet delights. However, you shouldn’t indulge in the calorie vice for too long after the first meal session: the captivating shows at the Teatro Rosso are only performed once a night and are over 300m footpath away from my restaurant table.

After a restful night’s sleep in the high-quality beds, I am greeted by a new day with a new destination: we are calling at the fourth largest island in Greece – Rhodes. Where once the Colossus of Rhodes supposedly stood, today I dock with Costa’s Colossus and quickly realise that Rhodes is an extremely attractive cruise destination.

First, the morning excursion takes us to the ancient town of Lindos with its impressive acropolis. Already the drive there gives good impressions of the island and raises anticipation for „more Rhodes“. This „more“ is fulfilled in the afternoon with an extended walk within the historic centre of Rhodes Town. Surrounded by a 5km-long city wall, you can immerse yourself in traditional Greece and drift through the countless alleys.

Captain’s interview instead of Captain’s table

On this voyage, SHIPS@SEA is invited to official appointments: For the production of aerial photographs of MS Costa Venezia, the necessary permits were obtained in advance and finally a briefing for the flight was conducted on board with the security officers. Costa also works very conscientiously here and understandably prioritises the proper execution of the flight.

In the following interview with Captain Giulio Valestra and Hotel Manager Miguel Munir, it becomes clear what the experienced ship’s management and its crew of 1,200 people from 40 nations focus on: Guests should feel part of the Costa family from the very first moment on board. The crew is there for its guests and they are welcome to believe what they see: the Costa motto „believe your eyes“ is lived reality on board. The 49-year-old captain Valestra presents himself as an enthusiastic sailor who loves his job and repeatedly emphasises how emotionally beautiful and also romantic his work is, for example when he stands on the bridge at night and cruises over the sea under the stars. He is just as enthusiastic about the new Venezia route as he is about his „Lady“, the Costa Venezia herself. He is her first captain since the christening and knows about the technical advantages of the ultra-modern ship. In this context, he mentions that nothing but steam comes out of his funnel – combustion residues are cleaned via diesel scrubbers. Like Costa, he is concerned to avoid polluting the sea and the environment as much as possible. Therefore, he focuses on low fuel consumption and is confident that Costa will achieve its goal of 0 emissions for the entire fleet.

The last destination of the voyage is also the first call of MS Costa Venezia: in Kusadasi / Turkiye SHIPS@SEA accompanies the ceremony of the traditional exchange of plaques between the ship’s master and the port authorities. A small delegation from the port authorities presents Captain Valestra with a opulent porcelain plate from the Mediterranean port.

Hotel manager Munir reports that it will be hanging on the bridge from now on. At the end of the day, we toast together and hand over a Costa Venezia ship model to the harbour manager. Kusadasi has an extensive waterfront promenade and a good tourist infrastructure close to the ship. In addition, the port is an ideal starting point for excursions to historic Ephesus.

It took a moment to get into the ship’s design – the longer I am on board, the more I like the special style of furnishing. The bathrooms in the cabins are less convincing – compared to the Costa Smeralda, for example, they seem uninspiring, but they serve their purpose. The air conditioning in my cabin failed several times: it broke down two afternoons in a row. Nevertheless, the dedicated crew was able to fix the faults quickly.

Despite the size of the Venezia, you quickly find your way around on board and have your favourite places in view. The Piazza San Marco inside and the seating area of the Bar Delle Stelle outside at the stern are convincing places to linger the ship. The view is magnificent and the crew is happy to provide cosy blankets for cool evenings. By the way: at the stern and bow of the Venezia there are numerous areas that are not covered in glass and from where you have an unobstructed sea view – wonderful!

The food is convincing both in the included restaurants and in the supplementary restaurants I tested – in my opinion, you can’t go wrong with your choice of restaurant. My favourites are the Canal Grande Restaurant, Teppanyaki and Dim Sum. Top marks go to the dessert quality: it is far above average. Sweet sins to the max! If you don’t have enough, you can have another portion. The service crew gives their all and is working hard to satisfy the guests.

I find the number of on-board photographers amazing: at „every“ corner and at almost every meal in the restaurant, someone wants to take my picture. Less and more discreet is more in this context. The same applies to the certainly exciting climbing garden on the sun deck: I have never seen anyone climbing here – presumably the price of 30€ for three rounds is less an invitation than a deterrent.

I find the route very attractive and exciting. The combination of extended layovers and two days at sea is great. The destinations are so varied and diverse that I dare say you could sail them several times in a row and not get bored. Costa’s own shore excursions are attractive and well worth the price. Finally being able to go ashore individually again makes cruising really tempting. It will be even more relaxed from June 1st: then all mask regulations on board will be discontinued for passengers and crew.

After challenging years, Costa is finding a safe way back to the usual normality: what is lasting for a long time is finally becoming good.
I will gladly go on a voyage with MS Costa Venezia again – on a different route or on exactly this one. It’s worth it: „Ahoy“ Venetian Lady.

ADVERTISEMENT: SHIPS@SEA travelled at the invitation of Costa Crociere, as well as with the support of the agency Will Kommunikation. 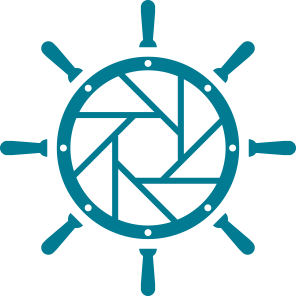