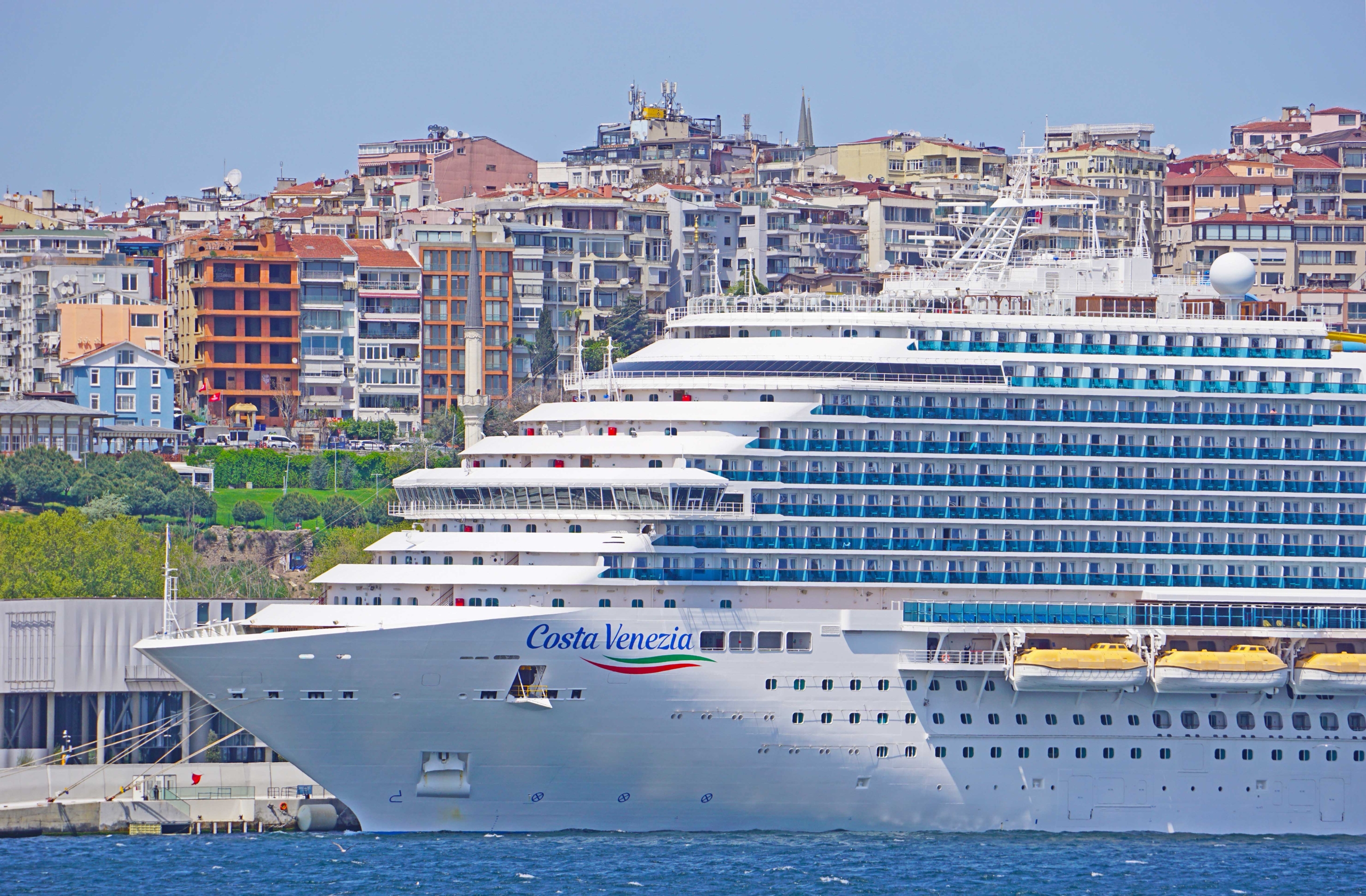 Designed for the Chinese market, MS Costa Venezia set sail for Shanghai for the first time at the end of 2019. The Italian-built ship completed its first cruises as planned before the covid pandemic broke out. The brand new Venezia already had to be taken out of service in January 2020 as one of the first cruise ships worldwide. Since then, the mega-liner has been laid up in various locations in Asia and Europe. Until today:

Even before the new – and so to say second – premiere, SHIPS@SEA flew to Istanbul with other invited representatives for the international press conference. Getting to know the ship, the port and the tourist highlights on land was also on the agenda.

The city on the Bosporus between the continents is the new base port – in the European part of the city, to be precise. Asia, however, is only a stone’s throw away and thus the Venezia has come closer to its original area of operation again.

Ultra-modern: Galata Port is the starting point for the Aegean Sea

Costa will deploy the new ship on back to back voyages in the Eastern Mediterranean. It will call at Turkish and Greek ports in the summer, as well as Cyprus, Israel and Egypt in the winter season. These voyages up to and including the 2023/24 winter season will provide the completely redesigned Galata Port with its impressive dimensions with a good basic occupancy rate. MS Costa Venezia is also the largest cruise ship ever to dock in a Turkish port – a fact that can be seen in the new terminal in a promotionally effective way.

Istanbul offers countless highlights. On the must-see list are a scenic cruise between Europe and Asia, a visit to Taksim Square with its surrounding narrow streets, the Hippodrome with its rich cultural past, as well as a visit to the huge market near Topkapi Palace. Needless to say, the Blue Mosque and the Hagia Sophia are „must-sees“. A visit to a hammam is a must for a wonderful re-vitalisation: this means pure relaxation in a Turkish steam bath followed by a massage. It hardly gets any better than this.

Press conference on board

Back on board Costa Venezia, the press conference with Costa President Mario Zanetti takes place. He emphasises that the attractive destinations with long layovers are an important aspect for the strategic deployment of the ship from Istanbul. In Istanbul itself and also in Kusadasi, Costa Venezia stays overnight in each case, enabling guests to make extensive discoveries ashore. Zanetti highlights the good infrastructure and logistical support of the Galata Port, which are essential for the operation of the large ship. In addition, Costa has entered into a strategic partnership with Turkish Airlines. According to him, the extensive route network is another important point: in two to three hours by plane, one can reach the Costa Venezia from twenty European countries with Turkish. Zanetti also explains that Costa is working hard to have all 13 ships in service again by the end of the year – with Costa Venezia, they have now successfully come one step closer to this goal, he announces.

It is no coincidence that MS Costa Venezia is named after Venice: virtually everything on board is reminiscent of Venice and is associated with the world-famous lagoon city. This is presented in an expressive way in the Marco Polo or Canal Grande restaurant. The latter, like the Gondola Lounge, features original Venetian gondolas.

Culinary alternatives with an Asian flavour are available on board in addition to Italian and international cuisine: the Sushino Sushi Bar, the Dim Sum Bar, the Hot Pot Restaurant or the Teppanyaki Live Cooking Restaurant.

Paintings and art prints in cabins and public areas are linked to the northern Italian city or its carnival. The three-deck high Piazza San Marco is impressive – as is the live music from one of its balconies. Right next to the piazza is the ship’s reception – which is so discreet that it is almost overlooked.

The distinct Venetian design style is undoubtedly intended for the Asian market. What may seem over the top or even kitschy to Europeans is very much appreciated there. Tastes are different. The functional cabins are perfectly adequate for shorter voyages and are complemented by spacious outside deck areas, which are perfect for use in the Eastern Mediterranean.

Before the first „real“ passengers arrive, there is a lot of scrubbing and screwing going on on board – the „Venetian pearl“ is being given the finishing touches. At the beginning of May 22, Costa Venezia will set sail again – the ship and crew have earned it after the long break. „Andiamo“ Costa Venezia!

After this inaugural visit without casting off the lines, we will soon come aboard again for cruising. Then we will set sail to discover exciting places in Turkey and immerse ourselves in Greek island life.

The extensive Costa Venezia story on the premiere voyage in the Eastern Mediterranean can be found here.

ADVERTISEMENT: SHIPS@SEA travelled at the invitation of Costa Crociere, as well as with the support of the agency Will Kommunikation.